Without really meaning to, I seemed to have become a writer’s stereotype.

Since late 2017, I have been living up north in the Arctic tundra, on an island of snow, ice and the occasional sunlight. It’s a small town here, the type where everyone knows everyone, or just about any way. Did I mention there was lots of snow?

More to the point, life in the Arctic for me turns out to be damn similar to those few famous authors who found a log cabin in the woods to write their books without any distraction. (As an aside, Thoreau comes to mind as the most iconic cabin-dwelling writer, but how often does that image neglect less-romantic realities such as how Thoreau’s momma lived nearby to do his laundry for him? That truth not only speaks to the unpaid labour of women behind the scenes of famous men but really thwarts that idea of any person as an island onto themselves.)

Okay – now, I’ve never been one to believe in a one-size-fits-all solution to any problem. And that definitely applies too for all us writers continuing the search for a holy grail formula to writing a book.
You know, the genie in a bottle who can help make words spill out of our fingertips, arrange into grammatically correct and well-paced sentences, and ultimately become that precious story we have been carrying around inside of us since forever.

So no – this is not the writer hack to rule all other writer hacks, okay?

It is just something that I had not anticipated to work so very well for me in my life as a writer, and as such, I wanted to share with anyone who might think it could work for them too. Capeesh?

Alrighty then – here are 5 reasons to move up North and excel at your writing game:

As any human living in 21st-century Western society will know full-well, the Internet is super ubiquitous in how we live our lives.  It’s gotten to the point that it seems highly unlikely for you to go through a whole day without surfing the Web. We even know that the NSA is Big-Brothering us as we speak on here, but still, we persist coming online.

But in the Arctic, or any remote place for that matter, the Internet is hella expensive. And slow. Very slow. Which makes it difficult and tedious to procrastinate with online games, Youtube, or scrolling through Instagram, Facebook, Twitter.

And that is a freaking life-saver, I’ve come to see.
The scourge of most creatives, self-employed, unemployed, is that damn icon on our desktop computer or phone home-screen that can keep us distracted for hours.

Now I know the surest way to beat a nasty vice, like procrastinating writing your words or cleaning the kitchen or doing your laundry (ahem, Thoreau) makes the punishment fucking expensive such that you never want to pay $200 to watch a cat video again…

2. Plenty of solitude to TCB

Taking care of business.
I talk in short-form sometimes because I am just that busy and productive… Or maybe it’s because I know kids these days keep talking in slang and I’m secretly afraid of losing touch with my youth… Let me put a pin in that for now.

I was saying earlier that where I’m at is a small town, like some 8,000.
Depending who and where you are, that can seem like a little or a lot. I’ve lived in big cities and small country farms, but this still feels pretty small to me. Nothing wrong with small, of course, just small is what it is.

And with me freelancing – as in, working from home/bed like a champ – that means I honestly spend plenty of my days alone. Okay yes, I share the company of 3 lovely animals, but they have never been the talking type. So a whole week can go by where I only interact with one or two people, literally. This would make some people go loopy, but I felt loopy before coming here and now I feel quite sublime.

Suffice to say that if you are the extremely introverted type, who not only enjoys but actually thrives in solitude to get things done, to connect with yourself, to unleash your creative potential, then moving to a place where that is the norm is your glass slipper… (A perfect fit, okay? Keep up.)

The Arctic is flipping gorgeous. 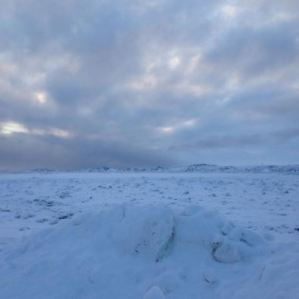 This place is so rugged and wild that it really communicates a uniqueness about itself, where in the same day you can witness its terrifying dangers of frigid cold (-50 below temperatures) and majestic wonders like the Northern Lights.

Basically, this is a place with such intense extremes that you are bound to be bewildered by something or another. The very fact that it is too wild to be easily taken over by us humans is exactly why it resists being “developed” into another generic Canadian city.

I absolutely love the notion of living somewhere that you are reminded every day how Nature rules over us and not the other way around – that you, we, are Nature too despite all the walls and roofs we build trying to fool ourselves into thinking we are some kind of alien visitors on this planet.

Nope, afraid not – this is our home and she deserves respect.
And all of that really inspires me to write and to write about things that reflect this attitude of grounded humility mixed with unabashed powers hidden in beautiful things.

4. Coffee any time of day

Okay sure, I could drink tea instead. And I do sometimes, I swear!

But yea, when the weather remains so freaking cold nearly all the time, and the days get really short so that you can watch the sunset at 1:30 PM, well that calls for another coffee in my opinion. 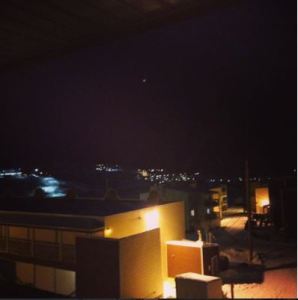 Not only does brewing another few cups keep you nice and cosy where ever you’re writing from that day, but it keeps you caffeinated appropriately when you look out the window to see pitch black darkness… everywhere.

Some people can get frazzled by the irregular hours of sunlight up here, but I like to imagine that I am finally becoming an early riser who is writing away while the rest of the world remains in a deep slumber.

Or, just imagine you are a forever night owl hopped up on the nectar of the gods.

Either way, as nearly 3 years sober now, coffee is my potion for setting the mood to write.

Where I am in the Arctic is a very unique hub of people.
The times I do get out of the house, I can meet folks who are international travellers (as in, born and lived somewhere else far away before moving here for work) like people from West Africa or East Asia or Central America, as well as Inuit Natives who make up a majority of the city’s population.

And of course, the Inuit populations here are diverse in and of themselves too.

I think everyone needs to experience living somewhere that you are the minority, in one regard or another. For some folks, that is all they have ever known, but for others, such as white people like me, we are taught to assume everyone speaks English and looks like we do. Getting rid of that damaging perspective is pretty fundamental in my opinion for learning how to tell stories that deserve reading.

Not only does this make for some truly cultured relationships, but lots of residents here are practising and skilled artists too, which is good company for any writer. There always seems to be craft shows and the like for people to sell and network with, such that you can always be rubbing shoulders with people who don’t fix you with a look of pity or shock when you tell them you are a writer.

So where else is better for someone aspiring to write interesting characters, original stories or unfamiliar places than up North, where many fascinating people are lured to visit and soon enough call home.

Convinced yet?
Well, don’t say I didn’t warn you about the cold, or the polar bears.
Oh, I didn’t mention them?

Maybe I will see you around someday soon…